John Wesley and the Supernatural


Love this post from Andrew Williams. He digs into Wesley's call for more experiential faith... the gifts of the spirit. I grew up in the Methodist church and these were not things we ever discussed though we looked to Wesley as the father of our faith.

The whole article is here 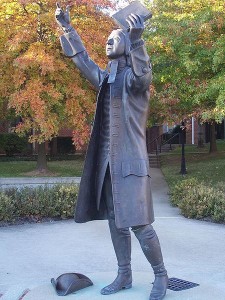 It is important to note first and foremost that cessationism (the belief that the gifts had ceased after the twelves Apostles died), was widespread during Wesley’s time, despite the lack of scriptural evidence for the position. Therefore, Wesley was one of the forerunners by declaring the need for the supernatural gifts of God to be experienced today. Wesley believed that it was not only possible for people in his day to speak in tongues and experience the other miraculous gifts of the Holy Spirit, but that it was necessary!


In his commentary on 1 Corinthians, Wesley notes and comments on the Apostle Paul’s assertion for people to earnestly desire the gifts of the Spirit:

“In the preceding verses, St. Paul has been speaking of the extraordinary gifts of the Holy Ghost; such as healing the sick; prophesying, in the proper sense of the word, that is, foretelling things to come; speaking with strange tongues, such as the speaker had never learned; and the miraculous interpretation of tongues. And these gifts the Apostle allows to be desirable; yea, he exhorts the Corinthians… to covet them earnestly.”


A few sentences later, Wesley comments on the commonly held view (at that time), that the gifts of the Spirit had ceased:

“From this time they almost totally ceased; very few instances of the kind were found. The cause of this was not, ‘because there was no more occasion for them’…the real cause was, ‘the love of many’, almost of all Christians, so called, was ‘waxed cold’. The Christians had no more of the Spirit of Christ than the other heathens the Son of Man, when he came to examine his Church, could hardly ‘find faith upon earth’. This was the real cause why the extraordinary gifts of the Holy Ghost were no longer to be found in the Christian Church; because Christians were turned Heathens again, and had only a dead form left.”[1]


In other words, Wesley not only rejected cessationism, but saw the gifts of the Spirit as necessary to attest to the Church’s liveliness!